I’ve been following the electric vehicle scene for many years and I decided it was time for me build an electric vehicle of some kind.  I thought I would start off small, and I had seen very few electric ATV conversions on the web so it seemed like a good first project that I could work on with my sons.  I don’t think anyone has built one with the same performance and features.  In addition to the electric drive conversion, I also set it up so that I can attach and power electric implements, making it more useful than just something to drive around.

I bought a used 2004 Polaris Sportsman for this project which was in good running condition.  I wanted something in good shape considering all the time that would go into the conversion.  The shot below is what the ATV looked like before I started any work. 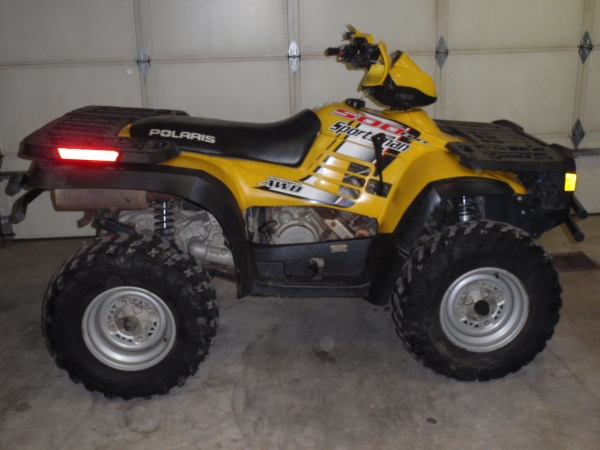 The main reason I chose this ATV model is that the engine and transmission are separate units, which you will see later made the conversion quite a bit easier.  In some ATVs the engine and transmission are contained in the same housing, and this would have made adapting the electric motor drive much more difficult.  The specifications of the stock ATV are as follows:

Here is my engineering team for this project, having one last “ride” on the ATV before taking it apart:

From some of the photos below you can see they were gung-ho on taking it apart, but later on when it came time to do the more time consuming design and assembly it took more cajoling to get them to stick around. 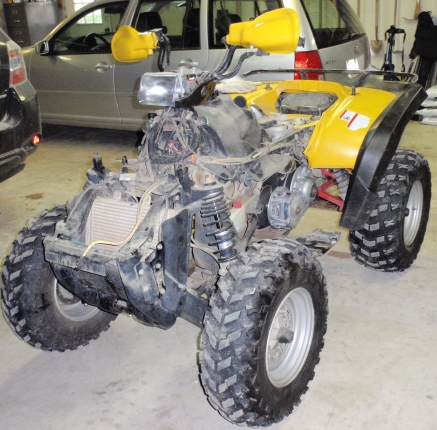 The picture below shows the original continuously variable clutch drive between the engine crankshaft and transmission input shaft.  This is the same kind of drive commonly used in snowmobiles.  The previous picture above shows the clutch pulleys removed from the engine and transmission, and this makes it fairly clear that to convert it to electric, it was “simply” a matter of driving the input shaft of the transmission with the electric motor.  The two-speed gearbox used in this ATV was ideal since it would have a low speed for any maneuvering or pulling jobs, and a high speed for getting around on the road.  The transmission ratios between the input shaft and axle for Low, High and Reverse are about 26:1, 10.5:1, and 16.5:1.

I found out there is a good market for used parts for these ATVs, so all the parts we removed will be sold and useful to someone else.  Basically everything related to the engine including fuel tank, fuel system, exhaust, cooling system, air filter, etc. all came out.  The complete dis-assembly took the three of us about 3 hours.  We also took out some of the original electric system related to the engine ignition, but left in all wiring necessary for the electronic console that displays gear selector, odometer and also controls the on-demand front wheel drive.  The 12V battery was left in, which will be charged from the main traction battery pack as I will describe later below.  The total weight of all the removed components was about 100 lbs.

The main components of any electric conversion are the traction (drive) battery pack, electric motor, and motor controller.  There were many smaller components used in the conversion that I will describe later below.  The two main choices I considered for the battery were lead-acid and lithium.  The main advantage of lead-acid is a lower initial cost.  However, the cost of lithium batteries has dropped considerably over the last several years to the point where in the long run the cost of using a lithium battery is lower than lead-acid.  Lithium cells can be recycled at the end of their life, but they can also be used for other less demanding electric storage applications when they no longer have sufficient capacity for an electric vehicle.  There are other pros/cons to consider when choosing a battery and this issue generates a lot of discussion on the electric vehicle conversion forums.   More about the basics of lead-acid vs lithium can be found here and here.

After quite a bit of research I decided to use lithium iron phosphate (LiFePO4) cells.  LiFePO4 is the chemistry of the cathode material used in the lithium ion cell.  The main reason I chose LiFePO4 is that they are very safe and do not have any problems with thermal runaway and fire like some other types of lithium chemistry cells.  In past years there were some laptop fires caused by lithium cells, but these were a specific type of lithium chemistry (LiCoO2) combined with poorly designed battery management systems.

After taking measurements of the frame and figuring out where all the cells and other components would be installed in the ATV, I chose 100Ah cells made by Calib Power Inc.  These cells have a nominal voltage of 3.2V, weigh 3.2kg(~7lbs), and are 142mm x 67mm x 218mm (~5.6″x2.6″x8.6″).  The cells have a maximum discharge current rating of 800A for short periods of time, so a single cell can provide about 2.5 kW of peak electric power (~3.3HP).  In most electric vehicle applications the general rule-of-thumb is that the battery pack should be designed so that the vehicle is drawing less current than 1 times the Ah capacity of the cell (1C) the majority of the time to maximize battery life.  So for my 100Ah cells that would be a current of 100A.  Each cell looks like the photo below:

I wanted to have a significant amount of battery capacity to allow the ATV to have a good driving range and also because I would be using the ATV to drive electric implements.  So the total number of cells that I ended up installing in the ATV was 32, which gives a nominal battery pack capacity of 10.24 kWh.  To maintain good battery life, the cells should not be discharged to less than 20% of their full capacity, which means the battery pack in the ATV has a useable capacity of about 8 kWh.  I’ll translate this to what this should mean for driving distance later below.  Since each cell weighs 3.2kg, the total weight of the battery pack is about 102kg (225lbs).

The motor I decided to use is made by High Performance Electric Vehicles, model AC-20.  This is an AC induction motor specifically designed for electric vehicles, and is shown in the picture below.  The motor weighs 50 lbs and is 6.5″ in diameter x 12.5″ long.  The motor has a continuous rating of 13HP and peak rpm of 6500, and with the motor controller I am using a peak rating of 37 HP and peak torque of approximately 75 ft-lbs.  Unlike the original engine, the peak torque is available at zero rpm and the torque curve is fairly flat over a wide rpm range and then slowly decreases at higher rpms (which makes electric motors actually more suited to power a vehicle than an engine).  So in comparison to the stock engine that was in the ATV, the electric motor produces about the same peak HP and a little more than twice the peak torque.

The motor controller that I used is made by Curtis Instruments, model 1238-7501.  It has a nominal input voltage range of 72-96V, a 2 minute current rating of 650A, and a 2 minute power rating of 74kVA.  The controller is programmable and can be set up to use in many different applications.  For electric vehicle applications it has the benefit of allowing regenerative braking, electronic forward and reverse, and has multiple safety fail-safe features.

I completed the project in 2012 but have not been able to add to the writeup on the conversion here lately.  You can find more information about the project at the evalbum.  The project was also featured in the February 2013 edition of Current Events, a publication from the Electric Auto Association.